Frédéric Gloriant, a member of CRHIA, is developing this project from 2018 to 2022, with the support of the Alliance Europa Institute for European and Global Studies.

Through the example of two major nuclear crises in which Europe was or is primarily involved, forty years apart, namely the second Berlin crisis (1958-1963) and the Iranian nuclear proliferation crisis that started in 2002, this project aims to pursue a historical reflection on the evolution of diplomatic practices in the European and Euro-Atlantic area, during and after the Cold War. More specifically, the project will look at the more or less secret, more or less visible managerial practices which persist at the heart of multilateral organisations such as NATO and the EU, where their influence remains quite decisive, especially when it comes to political-strategic issues. What is the role, the mode of operation and the influence of these formal or informal directorates? Whether it be the Franco-Anglo-American tripartism for Berlin, which quickly led to the quasi-institutionalisation of a “Quad” including the FRG within NATO, or the role of the “Big Three” EU states (Germany, France, Great Britain) in the negotiations with Iran, multilateralism and directorial practices cannot simply be opposed in a dichotomy; on the contrary, they maintain a complex, dialectical relationship which needs exploring. 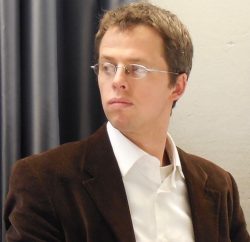 Senior Lecturer in Contemporary History at the University of Nantes, within the Research Centre for International and Atlantic History (CRHIA)

– the history of the Cold War and the construction of Europe

Frédéric Gloriant is developing the research project “From Berlin to Iran, Europe’s response to nuclear crises: directorates and multilateralism in the Euro-Atlantic area”.