Following the collective reflection carried out during the Forum Europa 1#, co-organised by Alliance Europa and the House of Europe (Maison de l’Europe) of Nantes in January 2021, the Focus Group is the result of the group working on the challenge “Participation and citizenship: How to better involve citizens or how to develop their action and their reflection on Europe at the local and regional levels?”. During this work, beyond the question of citizen participation, the notion of distant publics, and especially young people from 16 to 25 years old, appeared to be a priority and should be integrated into the issue.

The project “Focus Group on the perception of Europe by the 18-25 year olds” aims at gathering a “fixed” group of young people aged 18-25 from the political districts of the city (QPV) in order to study, within the framework of a citizen dialogue, variables of behaviour, thoughts, feelings, commitment with a view to understanding their relationship to Europe. The aim of this is to better understand the perception of Europe by these young people, who are considered distant or resistant, and to develop actions or projects that are more in line with their expectations, their interests and to develop their curiosity for the European project.

This action research approach, involving the University of Nantes and the Maison de l’Europe de Nantes, will be based on the proven methodological contributions of the Focus Group, a technique deployed since World War II in the United States based on the work of Kurt Lewin on group dynamics.

The identified objectives of this project can be summarised as follows :

-To set up a new action-research approach, in association with the University of Nantes and the Maison de l’Europe de Nantes, on the issue of young and distant audiences

– To analyse the data, to identify the apriori/resistances/reservations about Europe and to collect qualified information

– To propose, in long term, experimental approaches and adapted solutions, to be developped with cultural médiation actors, city policy actors, associations with a European vocation, the field of popular education, etc.

The Maison de l'Europe in Nantes is an association which federates and wishes to promote the initiatives of all the European players in Nantes and Loire-Atlantique.

The Maison de l’Europe is a 1901 law association which was created in 2005 on the initiative of institutional partners, the University and local associations involved in the promotion of European citizenship.

It offers information, advice, training and resources to raise awareness of the major challenges facing Europe today. It participates in the activities of the European Idea Factory.

Established in 2019 at Europa Nantes in the Creative Quarter on the Île de Nantes, it is dedicated to responding to all requests; it supports both individual initiatives (mobility, travel, etc.) and collective projects carried out by all types of actors (content, methodology, partnerships, etc.). 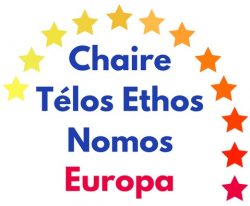 The Jean Monnet Chair “Télos, Éthos, Nomos de l’Europe” (TEN-Europa 2017-2020) has been carried by Arnauld Leclerc since 2015. It aims to strengthen the teaching of European studies within the new Institute of European and Global Studies, hosted by the University of Nantes since 2015, and to increase the visibility and impact of studies on Europe in the extra-academic field.